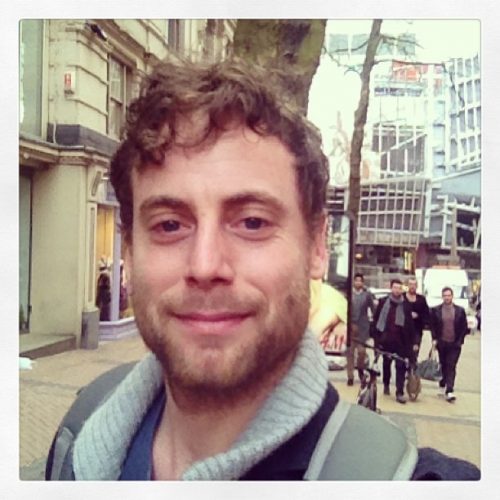 Interpreting in the field of television has always been a passion of mine since I was seven. I remember the day in 1986 when See Hear rolled in to Eastbourne and filmed my brother playing tennis at the David Lloyd centre. I met John Lee for the first time and I enjoyed hanging out with him for the morning. I was mesmerized by two things, there were CODA adults and a job called interpreting.

Since then it has been a one road journey for me. Learn all I can about television production and interpreting. Since I set myself that challenge I’ve been able to study media production and learn a lot from various people at the BBC, Channel 4 and other independent media companies. I’ve also been able to develop as an interpreter on screen but mostly behind the camera working with presenters and TV production crews. What didn’t occur to me was that one day I’d be asked to package what I know and turn it into something I can share with other people. That’s what happened next when I received an e-mail from the Albanian National Association of the Deaf (ANAD).

Training and developing a team of interpreters

They were looking for someone to provide a six week training/consultancy post to develop television interpreting on the news. This project was later extended to include a four week follow up of revision and training. Ultimately, the project would see Albania’s first regular broadcast of Albanian Sign Language (AlbSL) on national television. ANAD had been successful with lobbying the national broadcaster TVSH to provide this service, plus the preference from the Deaf community was to see Deaf people providing this in-vision service.

This is what I was asked to do: train and develop a team of interpreters and deaf in-vision signers to work collaboratively with providing an in-vision interpreting service. Plus, provide support and advice to ANAD and the national broadcaster TVSH, with how to manage this service. It was essential that the broadcaster supported and looked after the in-vision team for them to do their job well. Of course, ANAD needed to consider how to manage their role in the grand scheme of things as the go between with the Deaf community.

So in January 2008 I was contracted by the Finnish Association of the Deaf (FAD) to fly over and work in the capital Tirana for two months. ANAD is the only organization in Albania representing the signing community, and has been receiving advisory support for approximately thirteen years from the FAD and funding from the Ministry for Foreign Affairs of Finland. The joint ANAD-FAD project aims to improve Deaf Albanians’ human and linguistic rights, where access to society exists on equal basis. This is implemented through different approaches: organisational and management training; linguistic research and dictionary work; interpreter training; advocacy training/work and sign language on television.

The six weeks was divided into three phases:

Phase 1: Develop general knowledge of news topics. This would consist of discussing and learning about national and world new topics. By talking to each other the team could identify issues with vocabulary and become aware of strategies with how explain complex ideas to one another.

Phase 2: Preparing and translating news script. Working collaboratively between the deaf and hearing team means developing strategies with preparing and understanding the daily news topics. In pairs they would read the scripts, watch videos, and practice keeping up with the news (the interpreters would feed the in-vision signer).

Phase 3: Working in-vision. This would be about familiarising yourselves with the studio environment, working to autocue, taking feeds from an interpreter behind the camera and being aware of your presentation on screen.

I still get goose bumps every time I remember what we achieved. To see the pride in Deaf people’s faces when sign language appeared on TV. There’s that shared connection or sense of self that comes from being represented on a television screen. It was also a real landmark achievement for those who worked in ANAD. This is what ANAD was about, fighting for equality and representing the needs of the signing community.

Following this project I was then contracted to provide ongoing support as an FAD foreign advisor for the interpreter training programme and with the development of sign language resources. We worked on creating a collection of DVDs and a task book to facilitate the learning of AlbSL. This is a project that will hopefully make a difference to the next generation of Deaf people in Albania. Parents will have the resources to learn sign language and be encouraged to use sign language with their children. It makes me think of the huge impact experienced in the UK when deaf people began training to be teachers of BSL. Making the language more widely available means sign language can be used in places where it is needed the most.

It was a real honour to be a foreign advisor, working with ANAD and for FAD. I felt secure working in this capacity because of the care and approach FAD take when working with disempowered communities. FAD have a strong ethic, allowing the community to lead. We simply step in with advice and training to develop the necessary skills; the work itself must be led and undertaken by the community. I mainly worked under the guidance of Karin Hoyer and Selman Hoti who had heaps of experience of working in Albania and Kosovo.

The Deaf Community in Albania

What are my thoughts about the Deaf community now in Albania? It still shocks me to realise this is a community without deaf signing families, and I’ve still to meet a bilingual and proud CODA. The first marriage of a deaf couple took place in 1979, and only a few dozen more married thereafter. These are some of the characteristics we take for granted in a Deaf community here but does not exist in Albania.

ANAD is working hard on developing a stronger Deaf community, raising awareness about AlbSL, Deaf identity and Deaf culture. These concepts are relatively new in the Albanian Deaf community. However, once you have a joined up Deaf community you have a stronger lobbying voice that can push for a better education system, opportunities to study at university, basic civil rights (like being allowed a driver’s license), and access to qualified interpreters.

What about AlbSL? Albanian Sign Language is just as rich as any other sign language, however, there are still many things that have no sign. I get that sense of déjà vu, from when I was a child, being told there is no sign for this or that yet. This can make the role of a foreign advisor slightly tricky if you don’t act with care. Exposure to international signs or signs from other languages can contaminate the local vocabulary. So it makes sense for me to try and learn as much AlbSL as I can, including fingerspelling Albanian words.

Language borrowing and change is happening – this is because Deaf people now have the opportunity to mix with other international Deaf communities. Therefore, like BSL and other sign languages in the world, the door opens for international signs to be adopted and introduced into the language. The Deaf community in Albania does seem quite tight (young and old) and keen to preserve their native signs. Regular workshops and discussions happen, with ANAD’s leadership, about the importance of protecting and preserving the native language.

Recently ANAD has established a youth group, with a youth board, youth camps and workshops happening regularly. This I find really exciting. The young Deaf people are very united and strong with their campaigns to build a stronger Deaf community. This is why I had organised a fingerspelling competition in Manchester and London. I wanted to raise a bit of money to keep supporting their work, educating young Deaf people about Deaf culture and identity, plus instil a bit of pride in using AlbSL.

The competition I organised in March was called Hot Fingers, and was a Guinness Book of Records endorsed event. No one was able to break Thomas McWhinney’s 2008 record of 4.7 seconds to spell the BSL alphabet from start to finish. To find out more look out for the See Hear episode where they came and filmed the competition.

3 thoughts on "Robert Skinner: Albania and the Deaf Community"