This article focuses on why the #WhereIsTheInterpreter campaign is so important and highlights the discrimination that is felt and seen at systemic levels each day by the Deaf Community.

The 16th June 2021 was a significant day for the British Deaf community. It was the day when the Cabinet Office’s lack of British Sign Language (BSL) interpreters during live Covid briefings was challenged in the High Court.

The judicial review was the latest step in the ‘Where Is The Interpreter’ campaign which began in March 2020. Lynn-Stewart Taylor, a Deaf Consultant, started the campaign soon after the first Covid briefing in response to the lack of BSL interpretation during the press conference. She started the campaign on Twitter with the #WhereIsTheInterpreter hashtag.

The aim of the campaign is to convince the Prime Minister and Government to provide an on-stage (in-person) BSL interpreter at the crucial Covid Briefings, and other national addresses.  At the moment, individual broadcasters can add an interpreter, but this is inconsistent, can easily be dropped when reposting on other channels and relieves the government of their legal duty to provide accessible and understandable information.

Many deaf organisations support the cause, including the Royal Association for Deaf People, SignHealth, Centre for Deaf and Hard of Hearing People, and Action Deafness, as well as here at Deaf Unity.

Why having BSL interpretation is so important

What many in the non-deaf world don’t realise is that BSL is the language of choice for thousands of people. In fact, there are more than 80,000 Deaf BSL users in the UK for whom BSL is their first or preferred language, before English. They cannot always access the English language, even if subtitles are provided.

The COVID-19 pandemic has been a terribly anxious time for everyone and it has been critical to have timely and direct access to all the crucial information. The situation has been overwhelming and frequently confusing, even if you were able to follow what was being said during the daily Covid updates.

The lack of BSL interpretation during the initial briefings has meant that for tens of thousands of people the situation was even more stressful as they couldn’t access the information directly. 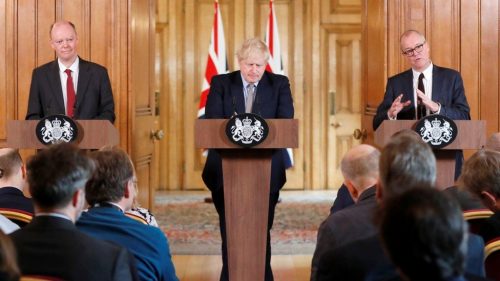 While BSL interpretation of the No. 10 briefings became available on the BBC News Channel and BBC iPlayer, which could be accessed via Freeview, and later on the government’s social media, not everyone has access to those channels.

Some may suggest that captions can be used on live broadcasts and d/Deaf people can get the information by reading subtitles. But for many d/Deaf people, sign language may be the only mode of communication. BSL and English are distinct languages. BSL is a rich and complex language with its own grammar and structure. Many who use BSL as their first language say they cannot rely on subtitles because they lack the literacy skills to access the complex information.  Add in the sometimes comical errors in captioning provided during the news and the situation becomes even more dire when we are talking about safety and legal directives being communicated.

An in-person interpreter at briefings would avoid the various technical issues and the interpreted broadcast is available on all channels, available for all to access.

After weeks of campaigning without a response from the government, a legal action was launched and the case was heard by the High Court on the 16th June. The case was being taken by Katie Rowley, from Leeds, who is Deaf. She argues that the Cabinet Office has breached its duties under the Equality Act.

There are around 350 further legal claims from d/Deaf people. These cases are on hold pending the outcome of Katie Rowley’s case.

The decision of the court is reserved until a later date.

More about the court case can be found here. 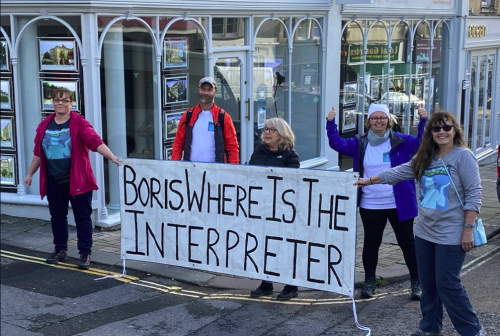 British Sign Language was recognised as a language in its own right by the UK Government in 2003 but it is yet to be granted legal status. The current Government has no plans to introduce legislation for a UK-wide BSL Act. They reason that the Equality Act 2010 should be sufficient to protect Deaf BSL users.

It has become clear during the pandemic that this is not the case.

The British Deaf Association has launched the BSL Act Now! campaign to press for a BSL Bill to be passed in Parliament. This would ensure that Deaf people have access to the same information and services as those who are hearing, including BSL interpretation at national addresses. Scotland have a BSL Act, but it only applies to their territory.

Striving for a barrier-free society

“As the coronavirus crisis continues, sign language community across the UK are still not being provided with important public health information in BSL, cutting us out of an important conversation and placing lives at risk”.

The pandemic has brought additional disadvantages and discrimination to the sign language community in the UK. Lack of access to information in their first language has meant that tens of thousands of people weren’t able to fully understand the information and guidelines provided, posing a risk to themselves and others.

It has led to a heightened sense of isolation and loneliness at a time when we should strive towards creating an inclusive society. Accessibility and barrier-free access to full participation in society is a human right.

Follow the hashtag #Whereistheinterpreter on social media, contribute your voice and/or funds and energy if you can. Lessons from this last year need to be learnt before we move on to the next one, and a repeat of the errors and failings.

For me personally, it has been worth all the hard work that has been undertaken and this is not a win just for me but for the future deaf, sign language generations to come. There is a lot more to do but the tides are turning and we will overcome.

Finally, thanks has to go to the deaf community, deaf organisations and our allies who have supported this campaign. It proves that we are stronger together and the outcome of the court case today shows this to be true.”

This article was written by Ania Tumm-Brennan, a marketing consultant and copywriter. Ania joined the Deaf Unity team to help promote diversity and social inclusion.

Looking for more support? We’ve made it our mission to improve the lives of deaf people everywhere. Check out Deaf Unity’s projects to find out what we can do for you. If you’d like to get in touch, contact us here. If you would like to write for us – please email Articles@deafunity.org